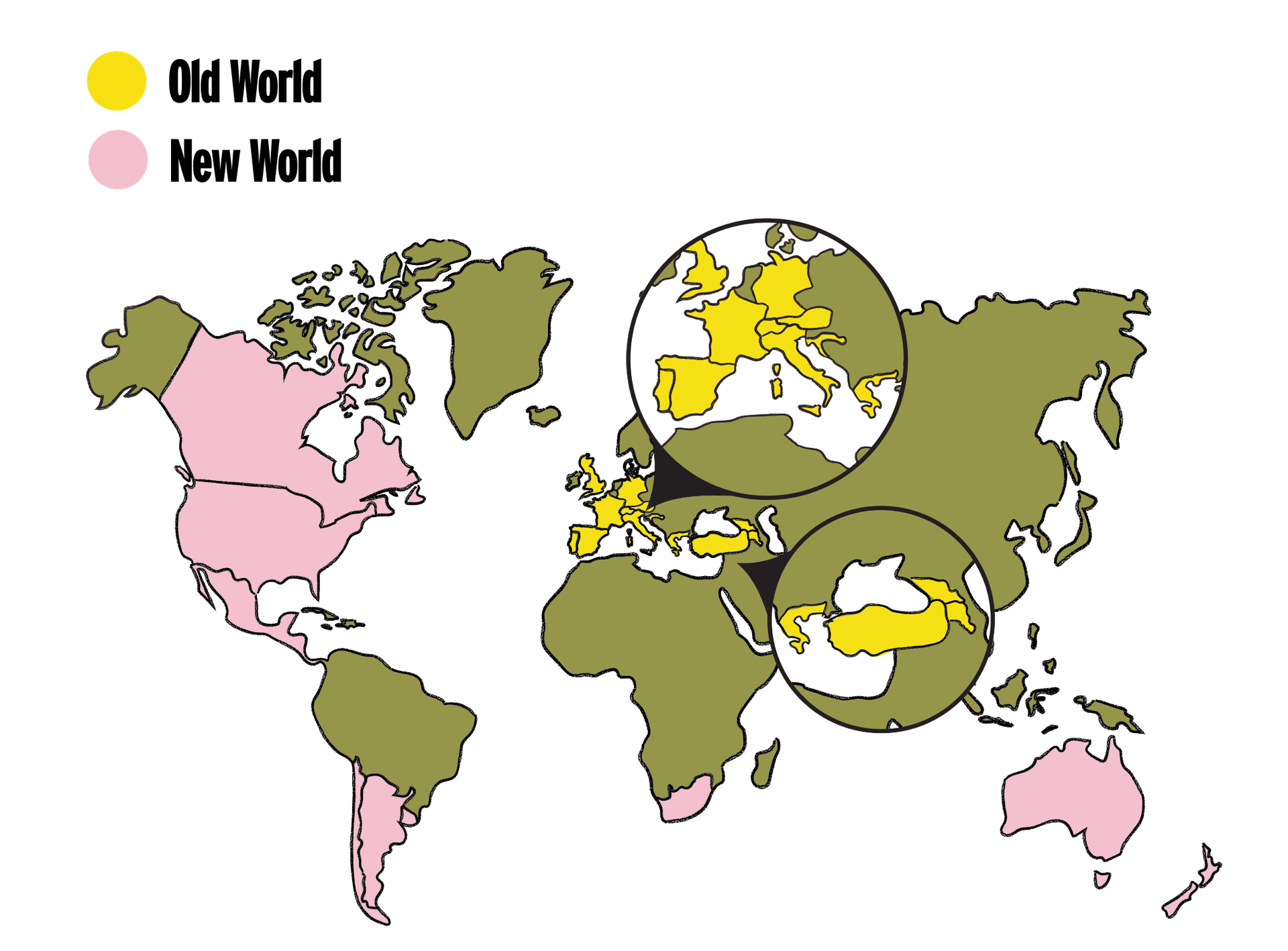 Nearly halfway through the e-course, can you believe it already?

Today we're jumping into a big one: Old World vs New World wine. Here we are going to cover just how the two terms imply different styles, history and methods of making wine. We will also be unveiling how wines are often labelled depending on where they are from. That means you'll be able to decode which grape is used on wine labels that aren't even in English! Phew. Duolingo is great, but we know we'd sure rather spend our time tasting and learning about the wines of the world instead of just new languages!

One of the most common questions asked by people looking into the vast range of wines out there is "what is the difference between New World and Old World wines?" These two expressions are broad terms that imply the origin and traditional style of wine. Basically, wine terms that categorise wine based on the region it is from and the length of its viticultural history. It also implies a general style and expression of the wines from its region.

In essence, Old World wines are those which come from countries which are generally considered to be the birthplace of wine itself. Some have a history that intends into millennia, dating back to pre-Roman times! Old World regions include those from most of Europe like France, Spain, Portugal, Italy, Germany, as well as some more obscure but equally historically important regions of Georgia, Israel and Greece.

New World wines are those of regions that have a viticultural history that is considerably shorter but have started growing vines and making wine with their own unique modern expression. Regions include more countries such as Australia, USA, Chile, Argentina, New Zealand, Canada and the UK.

Some of the oldest vines in the world are found in "New World" regions? This is because a vine disease, Phylloxera, killed most ancient European vines in the 1850s. However, some small pockets in Australia and Chile still have never been infected and are now some of the longest-lived vines that still produce grapes for wine in the world!

It's difficult to say there are significant differences between Old and New World wines because there's such a range in styles, production techniques, climates, and vintages as well as an overall global modernisation of winemaking techniques. However, to generalise, New World wine regions are usually warmer with richer soils that typically lead to a fuller body, and more fruit-forward flavours. Whereas Old World regions are typically slightly cooler, producing wines that are high in acidity and less fruity, and more focussed on spice and mineral notes.

Take Cabernet Sauvignon for example. When grown in the hot Napa Valley, it creates a full-flavoured fruit-forward wine with plenty of ripe, bold character and soft but ripe tannins. Whereas, Cabernet from the cooler region of Bordeaux in France has more crunchy blackcurrant notes with a stiffer tannin structure, higher acidity and more of a focus on cigar box notes and spice.

The difference between these two versions can of course depend on local wine laws and traditions. Cabernet in the Old World goes through different ageing and oak regime which can affect how the finished wine tastes.

It's pretty much the defining factor between the wines of the 'New World' and the 'Old World' — grape type vs regional location. Sure, when it comes to the actual grape growing, it's all about the climate, the rainfall and the age of the soil; but when we talk about the wine itself, do we speak first of *what* it is, or *where* it's from.

Only for the wines of the Old World can we confidently link region and variety every time. Why? Because ancient wine countries have laws and regulations governing what you can and cannot grow. In Burgundy, for example, 95% of the red wine is made from Pinot Noir, with one or two unusual locals sneaking into the tiny subregions on the borders. So you can confidently refer to the glass of Pinot Noir you're drinking as "Red Burgundy", and those people who know their stuff will automatically infer that you're drinking Pinot. You can't actually plant say Cabernet Sauvignon in Burgundy and still label your wine as Burgundy.

That certainly has its own hurdles (ie. you need to know the various grapes for all the regions around the world), but it's a step ahead of, or at least sideways, compared to New World countries like Australia. Both our biggest advantage and our stumbling block, we have no rules restricting what can and cannot grow. So your lovely refreshing glass of white wine from the McLaren Vale could be made from any grape variety in the world, or a blend of them... it means we can plant anything and discover what works, but it also means that the regions need to fight hard to establish an identity for particular styles.

Here's a wine label cheat sheet with some of the most famous Old World regions and their pertaining grape type. So if you see "Chianti" say on a bottle, you can know that the grape is Sangiovese.

Bonus Reading (for the keeners!)
4. Learn about some of the lesser-known regions as well as these three Old World countries that deserve more attention for their long history in winemaking.
5. Polish up your history notes with the History of Wine.

The best kind of assignment... tasting!

For today's assignment, you will practice tasting the difference between an Old World and New World wine!

To do this, select a single grape type (like Pinot Noir, Chardonnay, Cabernet, or Syrah) and two different bottles; one bottle from an old world region and the other from a new world region.

Ask yourself questions like which wine has more acidity? How do they taste similar? How do they taste different from one another? Is one bottle more focused on fruit and the other on spice? Maybe, maybe not! And of course, which did you like better and why?

You're half way there!  And look, now you can decode wine labels like a pro, too. Aint no fancy French getting in your way when it comes to knowing your regions and grape types!

We're very excited for what we still have ahead, both to learn and for you to taste!

What is Beaujolais Nouveau?