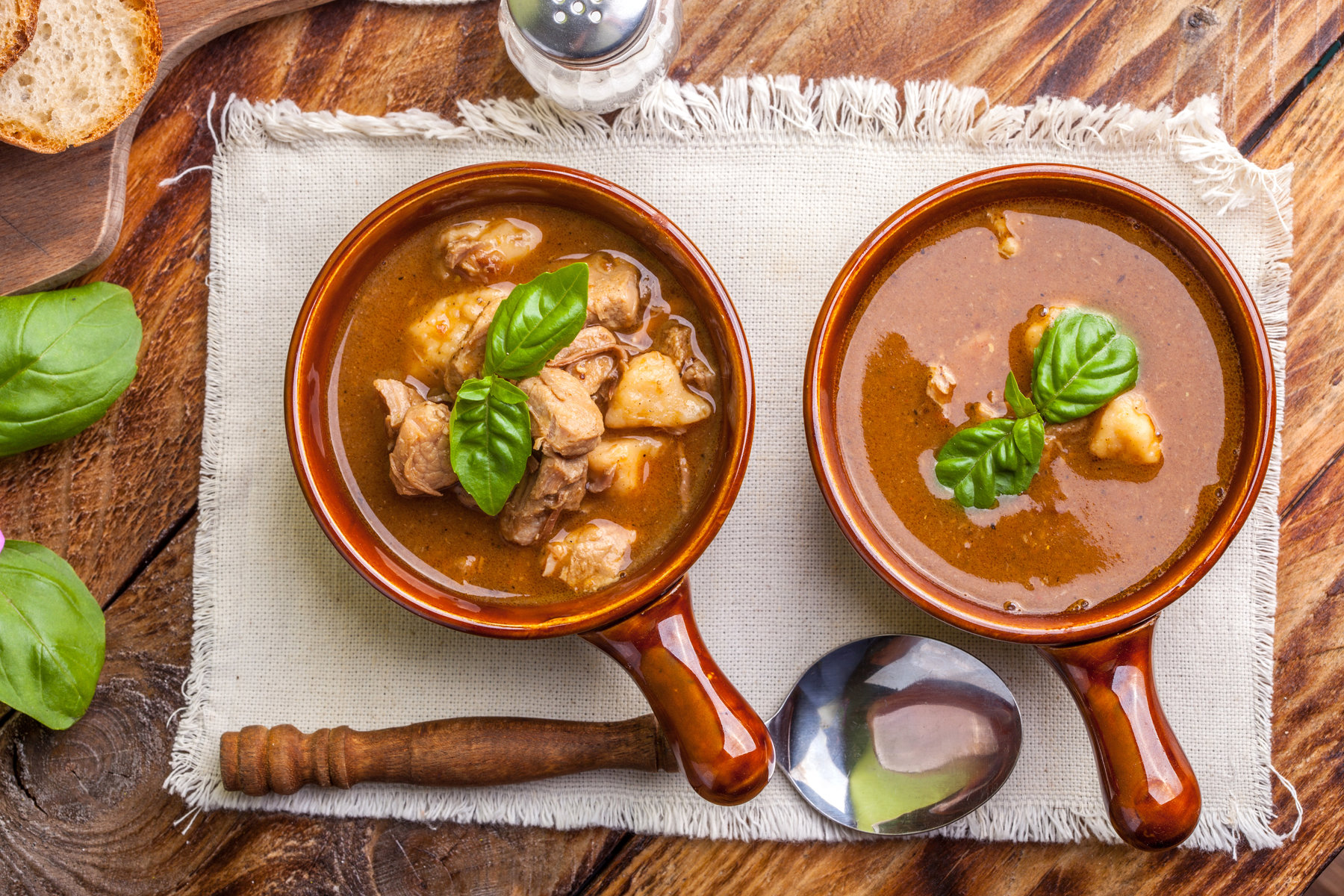 How to make the perfect Beef Goulash Recipe **Cooking and preparation time:** 145 minutes **Serves six people** Hungary isn’t often considered one of the great gastronomic nations of the world, but as any visitor to Budapest will tell you, a holiday in Hungary will feed the stomach just as

How to make the perfect Beef Goulash Recipe

Hungary isn’t often considered one of the great gastronomic nations of the world, but as any visitor to Budapest will tell you, a holiday in Hungary will feed the stomach just as well as its beautiful architecture and scenery will feed the eyes.

Goulash (or gulyas) is one of the national dishes, and can be found in every restaurant across the country. As with almost all foods and drinks from this part of Europe, its origins are hotly contested, with neighbouring countries battling over which one is the ‘true’ version and which variation is better… but for most of us, it doesn’t matter as long as it tastes great.

And goulash certainly does that - combining spicy paprika with slow cooked beef or veal, all in an unctuous, savoury gravy that can’t help but be mopped up with crusty bread.

Here’s a slightly simplified recipe for you to try at home, and I’m confident it will quickly become a firm favourite.

Preheat your oven to 170 degrees C. Cut your steak into roughly 4 cm chunks, and season with salt and pepper.

Heat your oil in a large, heavy, flameproof ceramic dish (a casserole dish is perfect for this). Brown your meat for a few minutes, until coloured all over. Tip in your onions, and stir well until they are softened, then add the garlic, too. Stir regularly.

Sprinkle the meat with the two paprikas, and crumble your stock cube on top. Pour the water into the casserole dish, and add the bay leaves, the tomato puree and some salt and pepper. Bring it to a simmer, give it a good stir, then stick the lid on and cook in the oven for an hour and a half.

While it is cooking in the oven, chop up and deseed your coloured peppers. Once the hour and a half is over, (carefully) remove the goulash from the oven, and stir in the peppers. Chuck it back in the oven for another hour, until the beef is meltingly soft and all those flavours have mingled together.

Serve hot, with a pile of rice and your favourite green vegetables.

Traditionally, this dish would be served with one of the beautiful red wines of Hungary - this country has an ancient and highly respected wine industry, but one which has never fully established an international market.

As such, it’s probably going to be quite hard to find a Kekfrankos or other traditional, Hungarian red wine. However, all is not lost, and there are other great pairings for this, the king of central European dishes.

A more easy to source alternative would be a good Rioja. This Spanish wine has a robustness and earthiness which goes brilliantly with the spicy, savoury hit of goulash, and brings out the best of the pepper and the paprika, while not overcrowding the palate.

It's time to put your palate to the test. Take our fun quiz below to finally meet your top 3 bottles which we can happily deliver straight to your door every month!