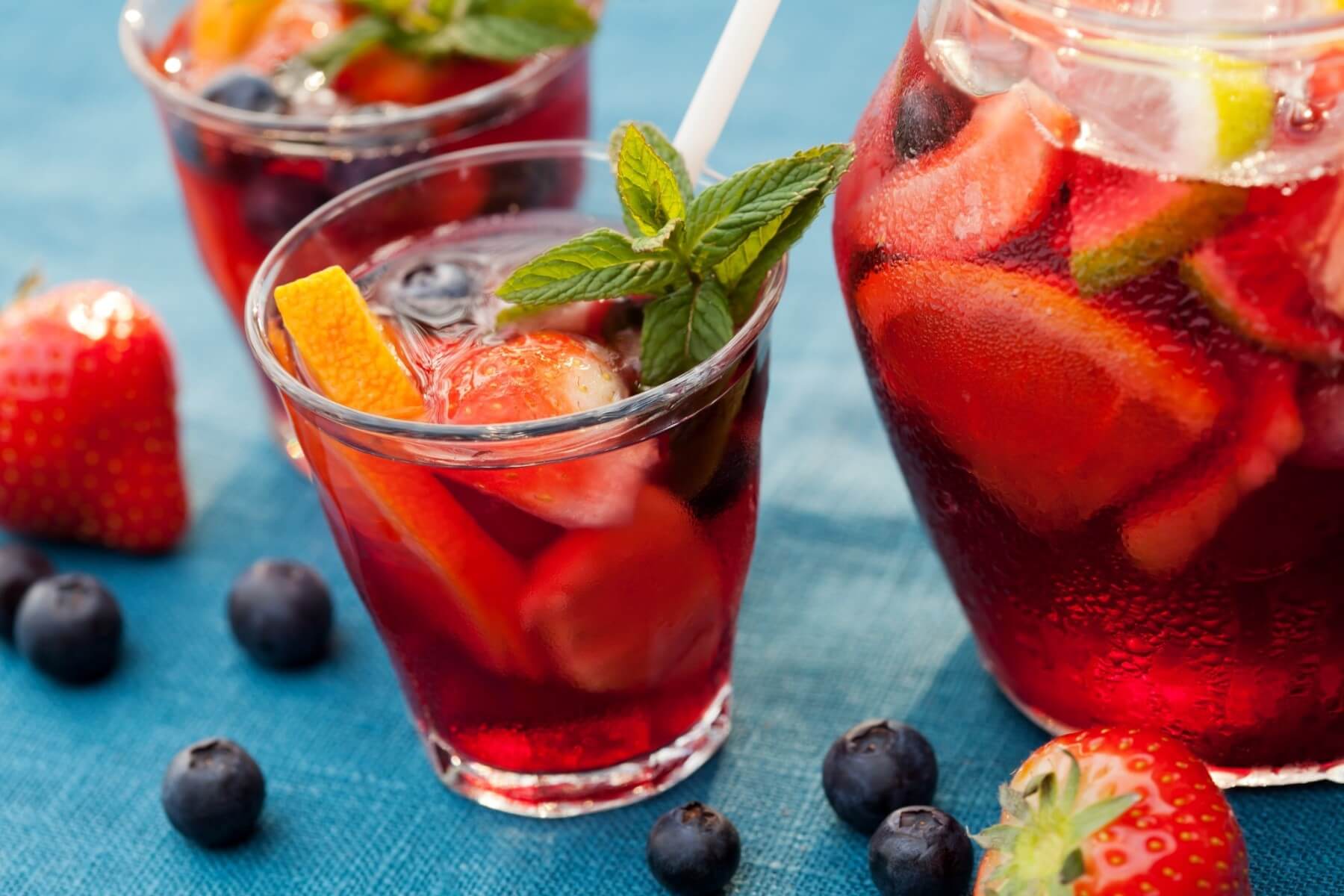 How to Make the Perfect Sangria

How to make the perfect sangria A vibrantly coloured, sweet and sticky drink, which is the architect and culprit of many a hangover, Sangria is undoubtedly one of the great summer beverages. Sangria is discovered by most of us on those heady, teenage holidays in sunny Spain, and if you've

How to make the perfect sangria

A vibrantly coloured, sweet and sticky drink, which is the architect and culprit of many a hangover, Sangria is undoubtedly one of the great summer beverages. Sangria is discovered by most of us on those heady, teenage holidays in sunny Spain, and if you've ever travelled around that country, or visited a tapas bar closer to home, you'll have realised there are countless variations on a similar theme.

It's a simple idea – wine, a soft, fizzy mixer, and a handful of fruit – but it's more than the sum of its parts.

Many say Sangria arose as a solution to two different problems. Firstly, it was a way of disguising poor quality wine and making it more palatable, and secondly, it was intended to make the heavy, full-bodied and dry red wines that Spain is famous for more easily drinkable under the scorching Iberian sunshine. As such, it is a flexible, cooling drink, ideal for any sunny day on the beach, or to share with friends in the garden or on a picnic.

There are two key approaches when choosing a wine to use as a base for your Sangria. The most common approach in both Spain and elsewhere around the world is the budget-friendly one; use a cheap wine, and not worry about it – the sweet soda and piles of fruit will cover any nasty taste fair successfully.

However, we'd encourage you to firstly choose a wine you actually want to drink, and then use the flavour profile of the wine to match your additional ingredients to. However you want to tackle making Sangria, it isn't a drink to make with an expensive wine. Spain is one of the great wine-producing countries of the world, and there are loads of middle-priced, exciting red wines which are perfect for Sangria without breaking the bank.

Do you need to use red wine? Well, no. You'll find Sangrias made with white, rose and sparkling wines, but if you want to emulate that classic flavour at home, you'll want to go for a decent bottle of dry, full-bodied red. Spanish wines which use the wonderful Tempranillo grape varietal are always going to be the most authentic ones for the recipe, but it would work well with many other styles and varietals, too.

The only real guideline is to go for something really rather dry – you're going to pile in the sweetness later, so you need a wine which is going to provide a bit of balance and complexity. Avoid very aged, oaky wines – the subtleties of these are going to be quickly swallowed by the other ingredients. Young, fruity, rounded numbers will do just fine.

If one thing is certain, then it's that Sangria isn't a drink for the wine purists among you. If you see it as nothing short of heresy to add fizzy pop to wine, then look away now.

The Spanish are notoriously unafraid of adding soft drinks to their wine, and if you wander around the streets of Madrid or Barcelona, you'll see teenagers tipping a glass of wine into a two-litre bottle of cola without batting an eyelid. Now, this is something of a required taste, but if you want an authentic, sickly-sweet taste of Spanish adolescence, then go right ahead.

Traditionally, Sangria is made with a mixer of simple lemonade. Cloudy lemonade is the most popular, and slightly bitter varieties made with real ingredients rather than a scary list of chemicals is surely the preferred option.

If you want to try something a little different, have a go at mixing with natural orange soda, or a good, fiery ginger beer, or, if soft drinks aren't your thing, you can use a fresh, unconcentrated fruit juice. Blood orange juice will give you a genuine Mediterranean taste, and cloudy apple juice and grape juice would be equally delicious. If you decide to go for fruit juice rather than soda, then top your Sangria up with a little sparkling water, to give it that refreshing, bubbly finish.

Fancy Something a Little Stronger?

Before you start thinking about your garnishes, you might be tempted to do as the Spanish sometimes do, and add a little splash of something stronger. Spirits and liqueurs – just a small quantity – are often added to the mix, to bring a bit of headiness and another flavour to the drink.

If you decide to go down this route, I'd recommend choosing something relatively mild, as this is a drink to be drunk by the glassful or pitcherful with friends. Fortified wines such as Sherry or Portare a great addition, as are fruit brandies. Just make sure you let your guests know before they start necking it down.

As I mentioned earlier, Sangria is a flexible, versatile drink. Almost any citrus fruit can be added, and there are other garnishes that range from the logical (such as mint leaves and berries) to the absurd, and frankly, disgusting: there is a famed bar in Cordoba which drops gummy bears into your glass.

Oranges and lemons are the most common choice, and soft orchard fruits like peaches and nectarines also work well. If you want to experiment with your garnishes, now is the time to think about the flavour profile of your base wine.

For example, if you're making your Sangria with a Cava or other sparkling white wine, you're better off avoiding the citrus, and adding summer berries instead. Chardonnay bases would work beautifully with slices of fresh apple, and if you want to up the spiciness of your red wine, drop in a cinnamon stick or a couple of cloves for extra impact.

Before you bust out your ingredients and concoct this easy and versatile cocktail, be sure to take our wine palate quiz to know which wines suit your personal taste!