Sometimes, the very best pairings and combinations come from the leftfield, from the unexpected, the counter-intuitive. Think about every great comedy double act there’s ever been - does the excitement and frisson come from their similarities, or from where they clash and spark off each other?

We’ve written quite extensively about food and wine pairing over the years, and it’s a subject we find equally fascinating and baffling. One thing’s for sure - there’s always something new to learn, and some new combinations to try... but we’ve always noticed that the vast majority of pairings we come across are based on harmony rather than contrast, on similarity rather than difference.

That’s fair enough, you might say. After all, if you want to accentuate the herbaceous, grassy, vegetal qualities of a particularly good Sauvignon Blanc or Cortese wine, you’re going to look to pair it up with a dish which offers those particular flavours..Spicy, savoury wines go with spicy, savoury foods, honey-sweet wines match up with elegant sugary desserts, creamy whites with creamy sauces, etc, etc.

There’s nothing wrong with that, of course, but surely in order to understand the rules, don’t you have to break them from time to time? Nothing truly exciting ever came from straightforward conformity, after all - and in the world of wine, there’s always room for experimentation, and always space for thinking outside the box.

Sometimes, the very best pairings and combinations come from the leftfield, from the unexpected, the counter-intuitive. Think about every great comedy double act there’s ever been - does the excitement and frisson come from their similarities, or from where they clash and spark off each other?

I can remember when I was a student, and accidental discoveries of great combinations of foods would arise almost by accident, or driven by a sort of hungover blurriness interrupted by moments of beautiful clarity. Ginger biscuits slathered with marmalade were a favourite I still return to (try it - it’s great!), and a block of cheddar cheese, a bunch of grapes, a bottle of cider and a Rolling Stones compilation were the key ingredients for a great summer afternoon.

Some counter-intuitive combinations go on to become staples in kitchens worldwide - peanut butter and jam, brie and cranberries, salt and caramel. This is the kind of thing we want to aim for with some our wine and food pairings - it’s a voyage of discovery that celebrates the bizarre, the weird, the seemingly impossible… and yet, it works.

So, without further ado, let’s take a look at five weird and wonderful food and wine pairings that you just have to try, no matter how strange they might appear at first. Trust us, we know what we’re doing…

Not just Champagne with fried chicken, in fact, but Champagne with fried anything. We have a friend in Edinburgh who regularly pops open a bottle of sparkling wine and pairs it with that great Scottish culinary delight, the deep fried battered meat pie, but perhaps that’s taking it a step too far.

Make no mistake, Champagne is a wine which works beautifully with fried chicken and french fries. The bone dryness of a good Champagne, along with that distinctive biscuity flavour, cuts through the grease and salt of fried food magnificently, cleansing the palate and removing any trace of oiliness that might otherwise become too heavy. 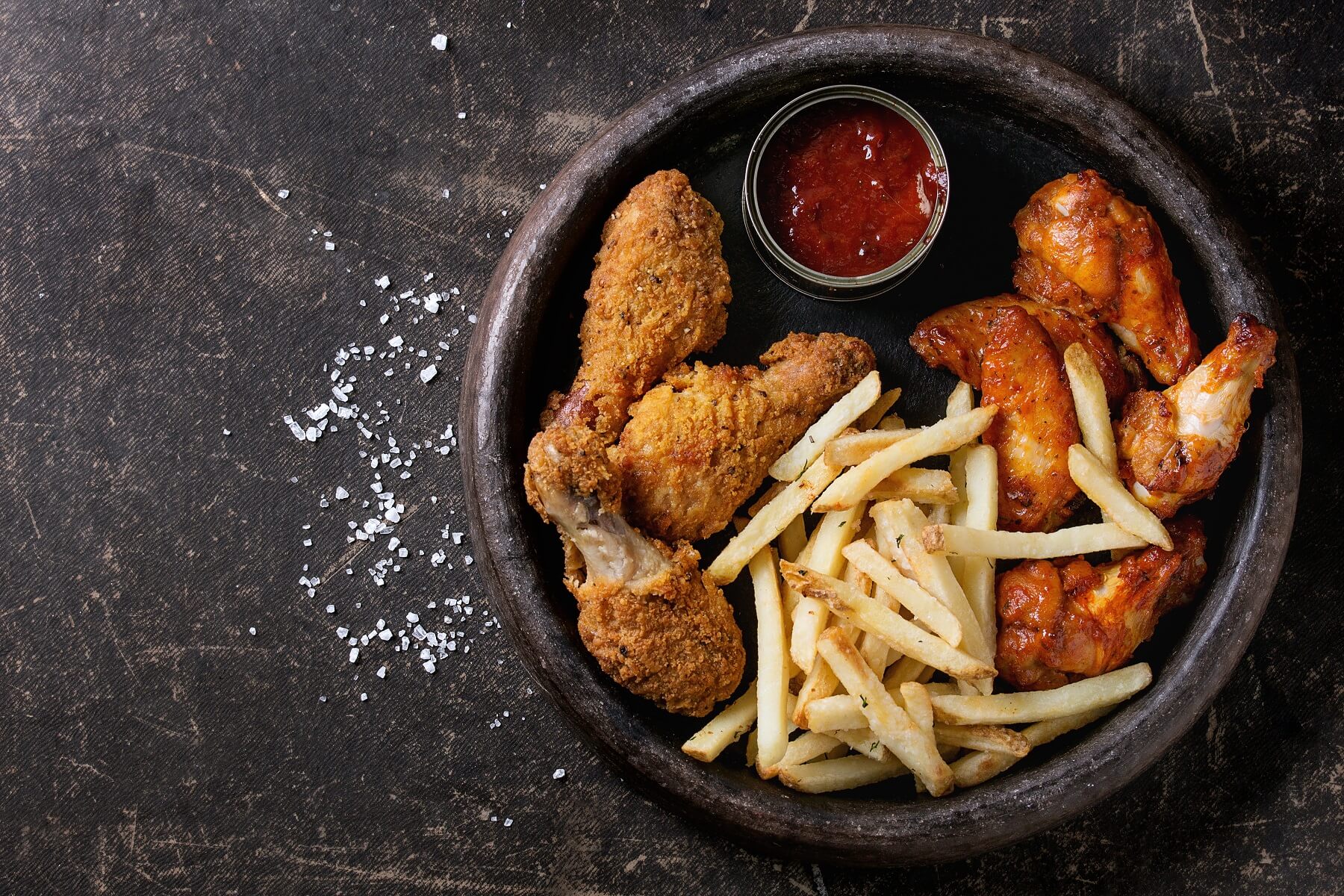 It’s best to steer clear of Prosecco and Cava for this combination, though - they tend to be more on the fruity side, when really want you want is that clean, acidic, biting nature that Champagne does very well indeed. Plus, is there anything cooler than cracking open a bottle of bubbly and drinking it alongside a greasy plate of takeaway chicken?

Red wine with salad? That’s a combination which is going to raise a few eyebrows, for sure. However, both of these red wines are light and juicy enough - with mountains of fruity character - to bring out the best in those tuna flakes, chopped tomatoes and green beans. The vinaigrette dressing’s acidity will actually soften the wine on the palate, making it incredibly smooth and silky, and bringing out the sour hints of dark fruit and cherries that make this pairing a great, if unorthodox, choice. 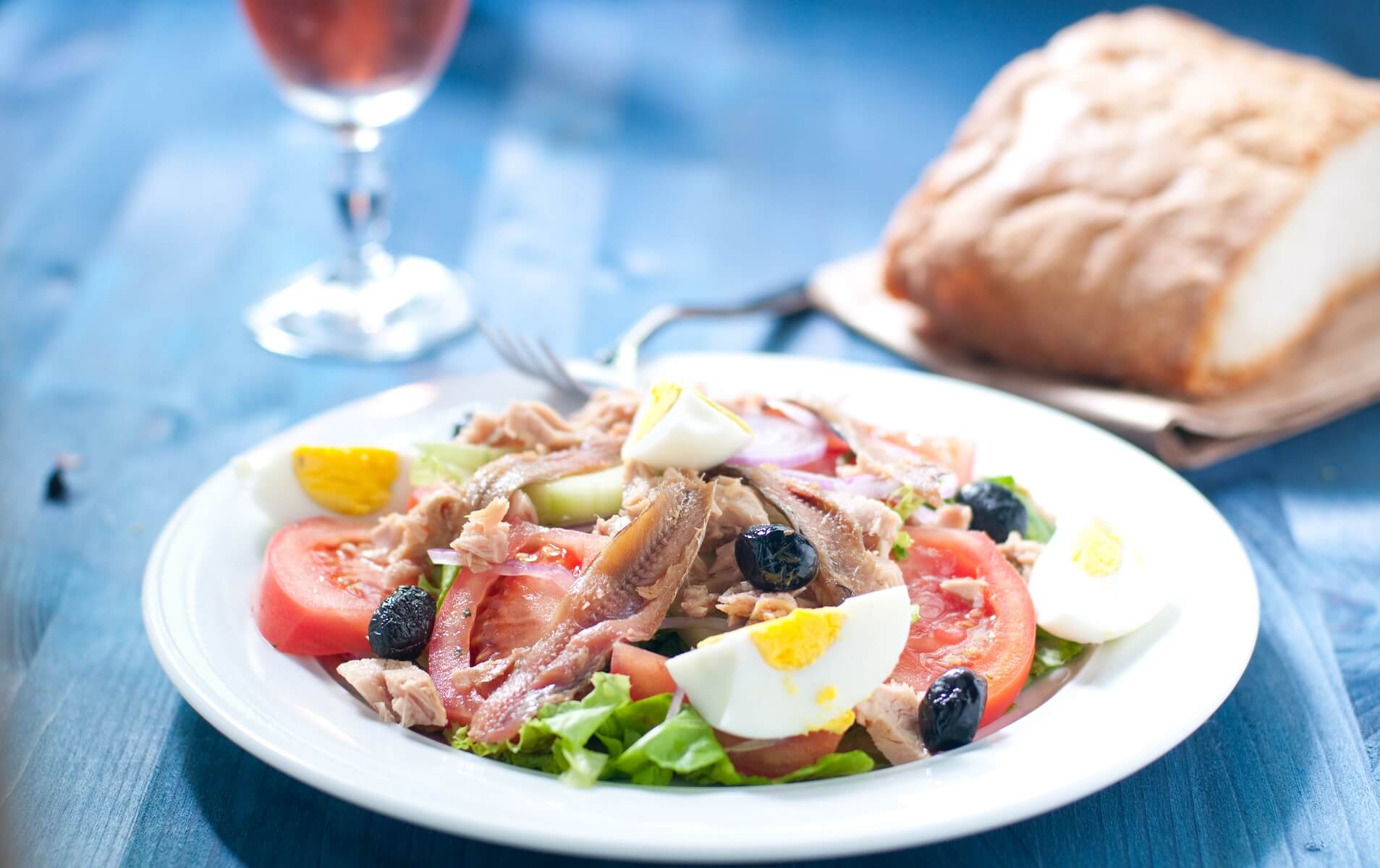 Bordeaux and the Full English Breakfast

The ‘Full English’ is one of those things you hear talked about at length by your mate who went to London for one summer, and couldn’t quite believe what the locals cooked up on a hungover Saturday morning. It’s a culinary tour de force, a national identity on a plate, and something which is actually pretty easy to replicate in your own home. The most common variation on the Full English consists of (deep breath, now): bacon, fried or scrambled eggs, fried bread, baked beans, sausages, mushrooms, a grilled tomato, black pudding (a type of blood sausage) and - if you’re in London - bubble and squeak, which is essentially just fried mashed potato with a few veggies chucked in. Head over to Wales, and you’ll be served fried seaweed and shellfish on the side, in Scotland, potato scones are a key component not to be missed. 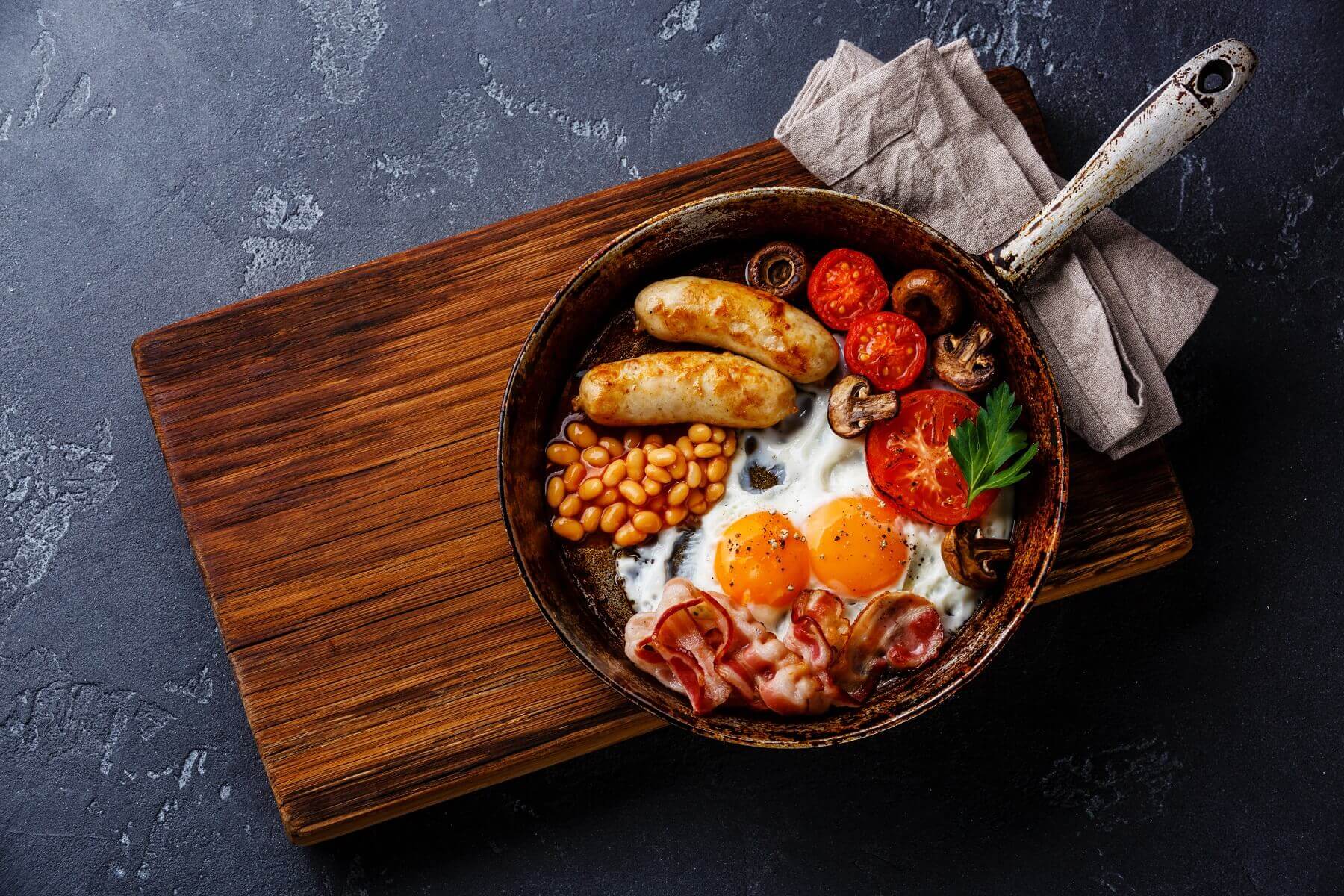 Sounds good, right? And you know what makes it even better? A nice glass of Bordeaux to go with it. Now, hear us out - the Full English isn’t the kind of breakfast you’re going to eat in the morning before work. It’s a weekend early-afternoon kind of breakfast, so don’t worry about your friends staging an intervention; this isn’t like pouring a glass of wine to have with your corn flakes at 7 am.

Bordeaux wines - as well as other wines in which Cabernet Sauvignon and Merlot make their presence felt - have a depth and roundness to them that work really well with the punch of the bacon, and also with the saltiness and savouriness of the other ingredients. Even if you’re doing a toned down version, just with bacon and eggs (which, let’s face it, is a top meal at any time of day), this combo really can hit the right spot - just don’t tell the French.

Most people - understandably - turn to tequila and beer when Mexican night rolls around, but a good glass of Grenache is actually a fantastic pairing for pork or beef and rice burritos, minced meat tacos, and a range of other Tex-Mex classics such as chilli con carne, and loaded nachos. Grenache has a great juiciness and roundedness that works with all of those harmonious savoury flavours - rice, meat, beans, cheese, avocado, etc - and ties the whole lot together. It’s an approachable, easy-drinking sort of wine, and one which isn’t going to overwhelm (or be overwhelmed by anything) on the palate. 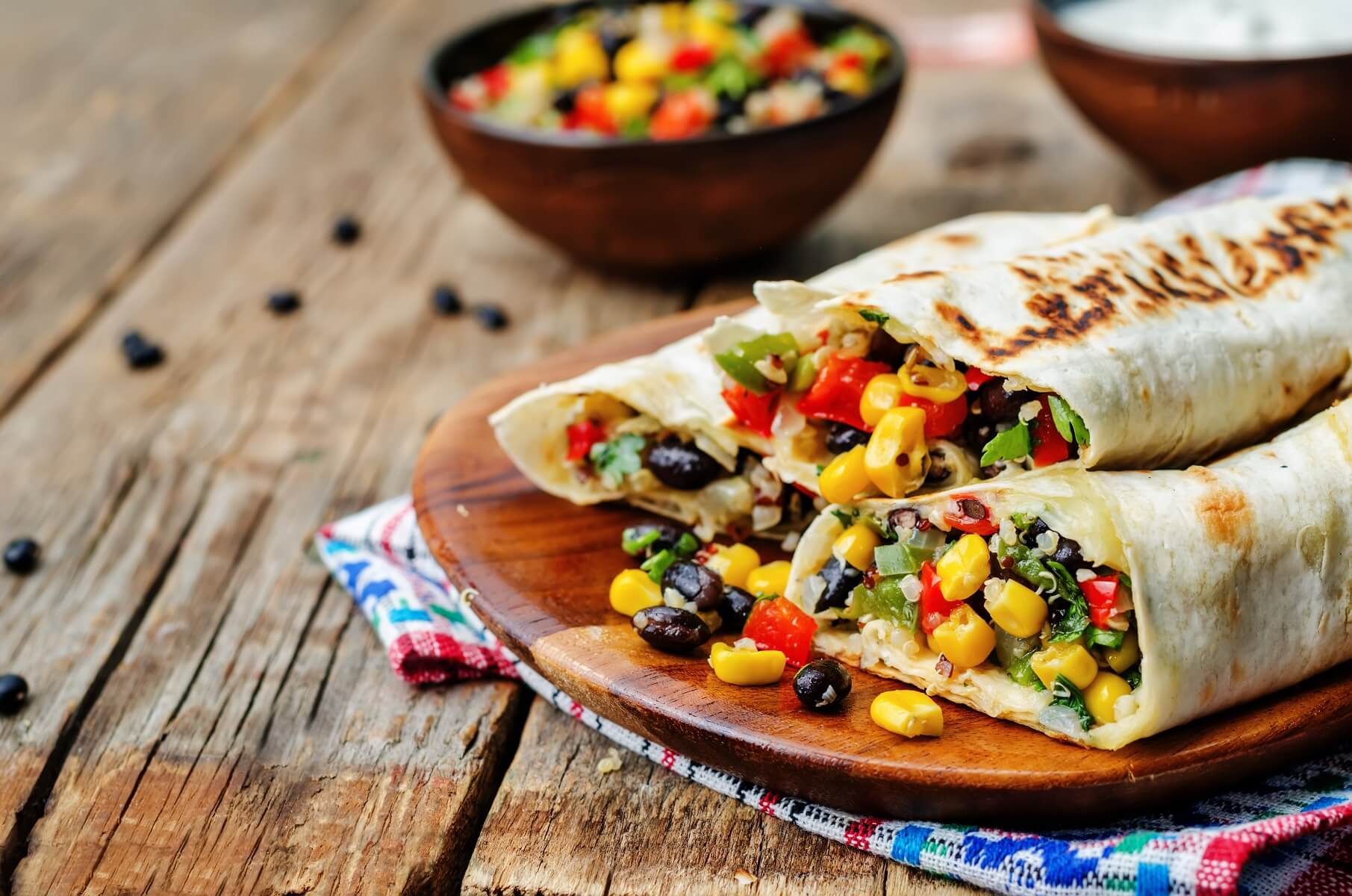 While a couple of decades ago, sushi was almost something of a novelty dish, nobody could deny its world-beating presence as a global favourite today. Here in Australia, we actually have some of the finest sushi to be found anywhere outside of Japan, and there has been much written about pairing wine with this highly distinctive cuisine.

However, most wine pairings when it comes to sushi seem to focus so prominently on the gentler, more delicate aspects of the dish, when in fact sushi’s flavours can actually be pretty robust. Soy sauce, wasabi, ginger, seaweed… nobody would say that these are delicate flavours, and yet they take up a huge amount of palate space in any sushi dish. Also, that mineral tang of raw salmon and tuna deserves a wine to play with, not to pussyfoot around. 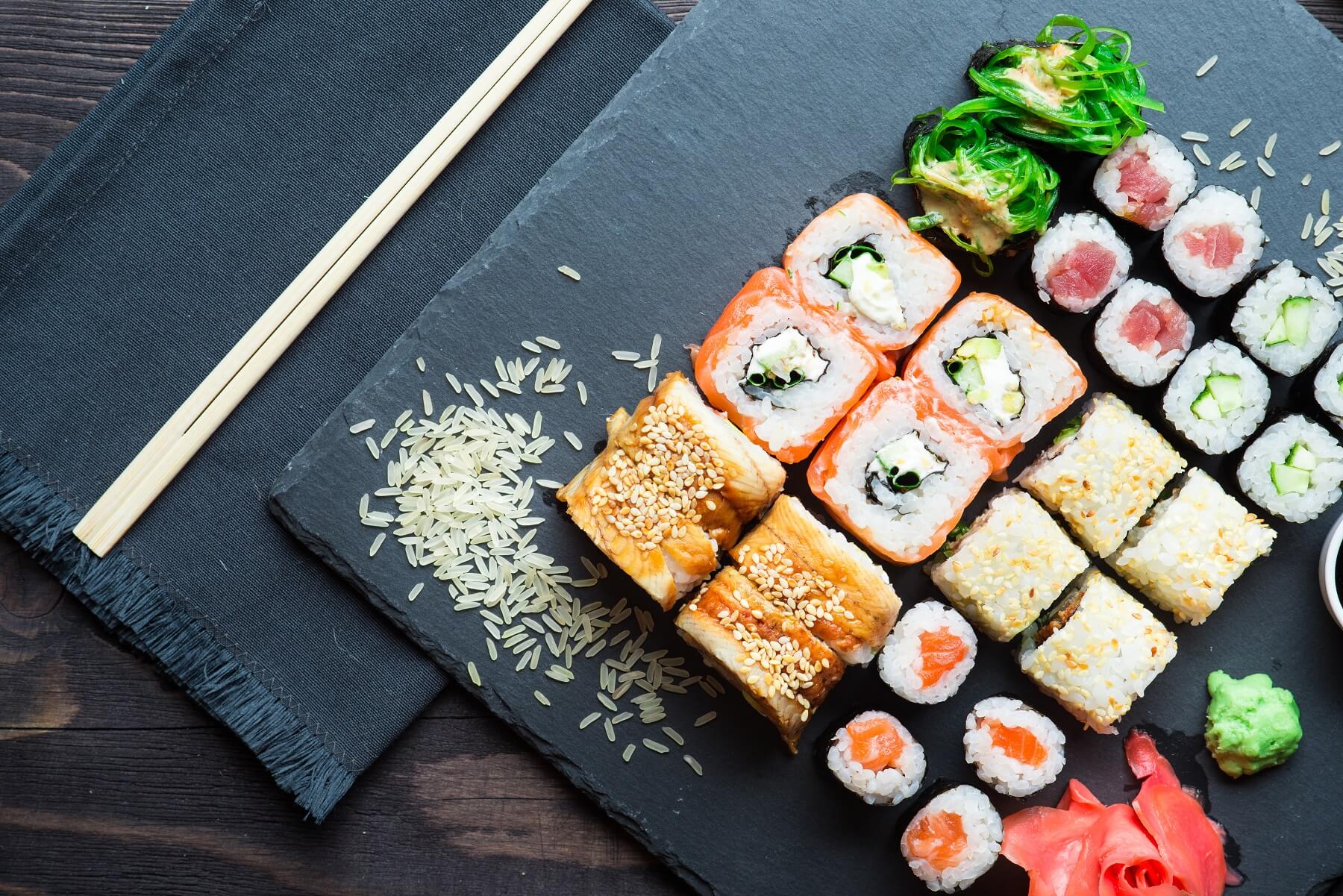 Our recommendation? Manzanilla Sherry. Again, it seems kind of weird, but it really does work very well. Good Sherry has layer upon layer of flavour, and loads of floral characteristics which suits Japanese cuisine down to the ground. There’s also a distinct saltiness to Manzanilla too, which works gorgeously with pickled rice and raw fish. Give it a try - you won’t regret it!

You might do as we did, and absolutely fall in love with these combinations. On the other hand, they might not quite work for you… but no harm ever came from stepping out of your comfort zone and trying something new, no matter how counter-intuitive it may appear at first.

There are tens of thousands of wines out there, each with something to say and something to offer. Keep an open mind, don’t be scared to jump in headfirst, and discover some new perfect pairings for yourself!

In the meantime, why not take our seven question palate profile quiz and we'll recommend three bottles for your personal tastes?